Intact Males: How We Pee 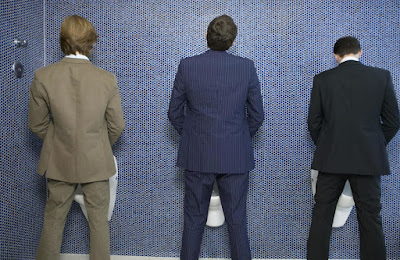 Not much thought is given to how we intact males urinate.

Although I have heard that some fathers teach their male children to pee one way or another, I can tell you one thing; my father didn't teach me. As far as I can remember, all he did was either sit me down on the toilet, or pull my pants down in front of a urinal and just said "go," so I was pretty much left to figure things out on my own once I started "going" by myself..

How does an intact man urinate?
In my experience (I've never really observed another man, intact or otherwise, as he urinates; I think it's taboo in most places.), there are two ways to do it. 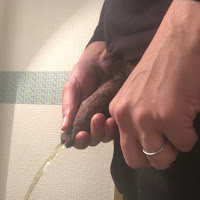 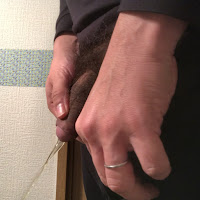 Peeing without retracting the foreskin
It may appear as though peeing with the foreskin pulled forward is unhygienic, but it's really not all that outlandish, considering that most of us peed this way as children, when our foreskins couldn't retract.

Actually, when women pee, the pee trickles around the area within the labia including the opening to the vagina, and although they may have to dab with toilet paper, they will have to take a shower and clean the area. This isn't outlandish either; it's called "hygiene." It's a simple fact of life that humans have to bathe.

Now, I have *heard* some people say that not pulling back your foreskin to pee is "unhygienic," because leaving pee there to foment might "cause infection," but I wonder how much of this is true; in my case, I have never had a urinary tract infection, or a bout of balanitis.

I researched the topic recently, and it was long believed that urine was sterile, but it turns out that this is not the case. Science shows that there are healthy levels of bacteria in every part of your body; an infection happens when flora in those parts of our body are disturbed. This is true for the mucosal tissues of the genitals in both men and women, as I've already talked about on a different post.

I'm going to make an educated guess and say that urine under the foreskin isn't a problem if the bacterial levels in the urine are "healthy." (Click on the link regarding bacteria in urine above.) My guess is that nature designed the penis in such a way that our foreskins can deal with urine. Additionally, it shouldn't be a problem if one bathes regularly anyway.

Retracting the foreskin to pee
This may not be possible for all of us. In most children it isn't, and they usually pee in the first way described above. To pee this way, men usually pull back their foreskins, just enough to reveal the meatus (that's what the hole at the end of the penis is called), and then just let it go.

Some men feel this might be advantageous, because urine does not wash through the preputial space. They may feel that for this reason, this way of peeing is more hygienic, and the smell of urine is less likely to occur. The problem that I see here is that, urine washing through the preputial space may actually be a *good* thing, because otherwise that area remains stagnant and may actually encourage infection. The body is well-equipped to deal with healthy levels of bacteria, after all.

Retraction may not be possible in a hand-full of men. I've read testimonies from men who are quite comfortable with the fact they can't retract, and they say urinating is no problem. They have no problems with hygiene or infection. Retracting the foreskin to pee is not an absolute requirement, but it might be preferable in some cases.

One man's philosophy on peeing
So I was doing some research on the internet for this post, and I came across an interesting post on this very topic on Quora. I don't think I could have said it better myself, so I'm just going to copy and paste the answer right here.

The question was "Should uncircumcised men roll their skin back when urinating?"


Should it be pulled back, at least behind the meatus (pee-hole) for urination? - Probably, yeah.


Do I pull mine back to pee? - Not always.
Now before you jump to the conclusions that I'm lazy, unsanitary or suffer some major cognitive dissonance, allow me to elaborate.
It's a decision I make differently at different times, based on the following factors:
Why not just retract as a general rule then, you ask? In short, because I have a long foreskin that covers the head regardless of my state of excitement, and even though it retracts easily at all times, quite honestly it’s just more comfortable to keep it covered. Sometimes those few seconds of a cool breeze wafting by a part of my anatomy that almost never encounters the outside world sans its built-in security blankey are a bit stimulating, other times it can be enough to induce a whole-body shiver and leave me feeling momentarily chilly. Either way, though minor inconveniences, I'm happy to eschew them if possible without any appreciable damage to my general hygiene.

I've also heard other uncircumcised guys say they retract because not doing so makes their urine stream unpredictable or otherwise more difficult to aim. In my experience, though, the reverse is true. My foreskin acts as a nozzle when I pee, ensuring that the flow is unified and always goes where I intend, even if I'm doing my best race horse impression. It's when I retract that sometimes extra pressure during release will throw me a curveball or *gulp* result in the demon known as splashback. Again, if I know I'll be washing down there in short order anyway, why not just let bygones be bygones and let him keep his turtleneck on and avoid any surprises.

So there's one more approach on whether or not to retract before peeing, and that's to use discretion to make a decision on a case-by-case basis.

The fellow who wrote this makes an excellent point; if you're expecting to have sexual interaction, or you just want to be "ready" for a casual encounter, you might want to pull it back to make sure things are as clean as possible down there.

Me, personally, after sex with the wife, I like to pee with the foreskin forward to wash my foreskin out. Believe it or not, I feel much "cleaner" after doing this; if I don't pee, my penis feels all sticky and I feel the need to take a shower. I don't know about other guys out there, but after sex, I just want to crash.

The gentlemen above also makes an important point; it's just more comfortable to keep it covered! Not to mention that I concur with him on stream predictability. For whatever reason, I feel I have more control over the flow of urine when I'm covered. When I pull back my foreskin, I don't always know where it's going to shoot first. When I pinch the end of my foreskin, the urine goes where I aim it. Also, it dribbles down into the toilet or urinal, instead of shooting straight out.

One time, just for a change, I was at a urinal, and I decided I was going to pull back my foreskin for peeing, and it was a huge mistake. The force of my stream hit the porcelain on the inner side of the urinal, and it bounced back all over my white Dockers. When I was done, I could see on the huge mirror in front of the sink that my pants were rather splattered. I lied and told people that it was water from the sink. Luckily the pants dried, and they were less noticeable, but still, I felt it was kinda gross to know there was dried pee on my pants. Now, I only retract unless I absolutely have to; when I'm covered, I'm always right on target.

Finishing up
So once you're urinating, what do intact men do?

I think it's generally accepted, even among circumcised males, that residual pee in or on the penis?

So what to do?

If you're intact, and you pee with the foreskin forward, you probably try to massage any urine left in-between your glans and foreskin out. I think that by feel you sort of just "know" how much is in there. You may want to give your foreskin one full retraction just to be sure, and then, just for good measure, give your penis a shake. Here's what it might look like:

Peeing with your foreskin retracted is no guarantee that pee won't get in between your preputial space, but I'd have to say it definitely reduces it.

After peeing this way, what I tend to do is shake my penis with the foreskin retracted. I retract fully and then give my shaft one milk forward to squeeze out any drops, then I pull my foreskin forward completely before putting my penis away. It looks something like this:

I imagine this is how circumcised guys pee, sans the foreskin part, although doing my research on google, I read that even cut guys have a hard time shaking out those last drops. Some men prefer to pee in a toilet stall, that way they can just take some squares of toilet paper and dab some of the pee off.

I've tried it, and I personally don't like it. The moist toilet paper sticks to my glans and it's such a pain to get it off.

"No matter how many times you shake and dance, the last few drops end up in your pants." ~Author unknown

External Links:
Science News: Urine is not sterile, and neither is the rest of you


Quora: Should uncircumcised men roll back their skin back when urinating?
Posted by Joseph at 2:06 AM No comments: